An agricultural development program was started and thousands of hill people poured into the valley in search of land. A malaria-eradication scheme, launched by the Government and the United States Agency for International Development (USAID) in 1954 proved so successful that the whole district was declared malaria-free in 1960.

All this was progress of a kind. But the human influx was so vast and so rapid that inevitably it had a disastrous effect on the wildlife habitat. Poaching became rampant, and little was done to control it. The main target was rhino, whose horn – renowned for its alleged medicinal properties – already commanded enormous prices in the drugstores of the East.

By the end of the 1950s it was clear that if such a decline continued, the rhino and other animals would soon face extinction. Already the swamp deer and the water buffalo had almost disappeared from Chitwan. Therefore, in 1959, the Fauna Preservation Society appointed the distinguished British naturalist E. P. Gee to make a survey. Gee, who had spent most of his life in India and was an authority on its wildlife, recommended the creation of a national park north of the Rapti river, and this was duly established in 1961. He also proposed a wildlife sanctuary to the south of the river for a trial period of ten years. After he had surveyed Chitwan again in 1963, this time both the Fauna Preservation Society and the International Union for the Conservation of Nature, he recommended an extension of the national park to include areas of rhino country in the south.

In 1963 a government committee investigated the legal status of immigrants in the Chitwan valley; the Land Settlement Commission of 1964 resettled 22,000 people, including 4,000 from inside the rhino sanctuary, elsewhere in the valley. Drastic though it was, the operation brought little immediate improvement, for the people who had been evicted poured back into the area to collect firewood and fodder; the habitat deteriorated still further, and the rhino population continued to decline. A survey carried out in June 1968 estimated that only a total of between eighty-one and 108 rhinos were left. The report, published in 1969, predicted that unless total protection were afforded, the rhino would disappear by 1980.

In December 1970, His late Majesty King Mahendra approved the establishment of the national park south of the Rapti river. The boundaries were delineated in March and April of 1971, and preliminary development began in October that year. Chitwan National Park was officially gazetted in 1973 by His Majesty King Birendra and became the first national park in Nepal.

Chitwan National Park is the first national park of Nepal. It was established in 1973 and was granted the status of a World Heritage Site in 1984. It covers an area of 952.63 km2 (367.81 sq mi) and it is located in the subtropical Inner Terai lowlands of south-central Nepal in the districts of Nawalpur, Parasi, Chitwan and Makwanpur. In altitude it ranges from about 100 m (330 ft) in the river valleys to 815 m (2,674 ft) in the Sivalik Hills.

In the north and west of the protected area the Narayani-Rapti river system forms a natural boundary to human settlements. Adjacent to the east of Chitwan National Park is Parsa National Park, contiguous in the south is the Indian Tiger Reserve Valmiki National Park. The coherent protected area of 2,075 km2 (801 sq mi) represents the Tiger Conservation Unit (TCU) Chitwan-Parsa-Valmiki, which covers a 3,549 km2 (1,370 sq mi) huge block of alluvial grasslands and subtropical moist deciduous forests 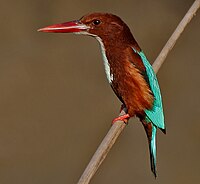 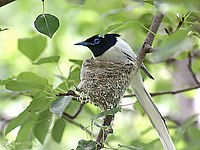 Every year dedicated bird watchers and conservationists survey bird species occurring all over the country. In 2006 they recorded 543 species in the Chitwan National Park, much more than in any other protected area in Nepal and about two-thirds of Nepal’s globally threatened species. Additionally, 20 black-chinned yuhina, a pair of Gould’s sunbird, a pair of blossom-headed parakeet and one slaty-breasted rail, an uncommon winter visitor, were sighted in spring 2008.[19]

Especially the park’s alluvial grasslands are important habitats for the critically endangered Bengal florican, the vulnerable lesser adjutant, grey-crowned prinia, swamp francolin and several species of grass warblers. In 2005 more than 200 slender-billed babblers were sighted in three different grassland types.[20] The near threatened Oriental darter is a resident breeder around the many lakes, where egrets, bitterns, storks and kingfishers also abound. The park is one of the few known breeding sites of the globally threatened spotted eagle. Peafowl and jungle fowl scratch their living on the forest floor.

The best time to visit Chitwan National Park which has a tropical monsoon climate, with height humidity all through the year, and three main seasons.

Summer
March to early June are the traditional hot months, with temperatures rising progressively to a peak in May. During April, despite the heat of the day the nights can be quite cold. South – westerly winds prevail, and relative humidity is lowest in March.

Monsoon
Towards the end of May the pre-monsoon storms set in. Dark clouds mass in the afternoons, with thunder and lightning and high winds. If rain falls, it comes in late afternoon showers lasting perhaps only fifteen to twenty minutes. As May changes into June the showers come with increasing frequency.

When the monsoon proper begins, around the middle of June, it is another story. From then until late September the moisture-laden south-easterly winds weeping up from the Bay of Bengal bring heavy rain, and of the annual total of some 80 inches, more than 80 per cent falls in these three months.

Precipitation is not normally continuous, and often, in any monsoon month, there are as many dry days as wet ones. During the monsoon humidity is extremely high.

Winter
Winter lasts from October to the end of February. The northerly winds are cool, coming down from the mountains, and this is the best time of the year to see the Great Himalayan Range, the air being particularly clear in November.

January is the coldest month, with temperatures falling almost to freezing-point, especially when it rains. From late November the relative humidity touches 100 percent in the mornings, and so there is dewfall during December and January nights and sometimes when you hear the drips pouring off the trees in the morning, it is often mistaken for rain. After an especially cold morning it is hard to believe that the temperature will rise to 20-25 Celsius in the afternoon.

WHAT TO PACK FOR YOUR SAFARI ?